If you’ve used an iPad Air from the last two years — either the 4th-gen Air from October 2020 or the 5th-gen model introduced earlier this year — the new 10th-generation iPad (no adjective) is remarkably familiar. Same size (well, almost — see below), and the same basic design: no home button, round display corners, all-screen, no Face ID, and Touch ID on the side button.

They’re even offered in the same two storage tiers: 64 and 256 GB. I’ll throw in the brand-new 11-inch iPad Pro and the 9th-gen iPad to boot for a price comparison of all the 11-ish-inch iPads in the lineup today:

A lot of people are now complaining that the iPad lineup is “confusing”. I disagree. There are specific aspects of the iPads in the lineup that are confusing, or at least disappointing. These aspects are mostly related to peripherals — which Pencils and which keyboard covers work with which iPads — and I wrote about these issues last week. But in terms of the fundamental question facing would-be buyers — “Which iPad should I get?” — I don’t think this lineup is confusing. I’d argue, in fact, that it’s less confusing, because the lineup is more complete. Prior to last week, there was a significant gap between the 9th-generation iPad (which remains in the lineup, unchanged in price) and the iPad Air. The 10th-gen iPad fills that gap.

There are other subtle differences — the Air supports more Wi-Fi 6 bands, but the iPad 10 supports Bluetooth 5.2 while the Air only 5.0. But the above list is really it for practical differences. Do you think any of those bullet points are worth an extra $150? Then buy the iPad Air. If not, congrats, you can save $150 (and perhaps put it toward the pricey Magic Keyboard Folio).

I’ve been testing the iPad 10 since the end of last week.1 2 It occurred to me soon after setting it up that I haven’t used a Pencil 1 in years. Putting aside the issue of the USB-C-to-Lightning adapter, it’s striking how much less I like the original Pencil compared to the Pencil 2. When the Pencil 2 debuted in 2018 alongside that year’s iPad Pros, I wrote:

The new Apple Pencil is one of the best “2.0” products I’ve ever
seen. The original Apple Pencil is a terrific product, but the new
one nears perfection for the concept. New and improved:

The new Apple Pencil is so good I have no complaints and can only
think of one suggestion for the future: it’d be nice if there were
haptic feedback when you double-tap.

Four years later, that entire passage holds up. Now, though, I like the Pencil 1 even less. I don’t like the glossy/slippery surface material, I don’t like how it rolls around on a tabletop, and I find the cap downright silly. If the original Pencil had to have an integrated Lightning plug, it should have been retractible instead of permanently protruding and thus requiring a cap. Also, I’d forgotten that double-tapping (which, by default, switches between pen and eraser while drawing) was a new feature for Pencil 2. I spent a few minutes thinking the Pencil 1 Apple provided me with the iPad for testing was broken because double-tapping didn’t work.

As for the new adapter, once you’ve used it to pair a Pencil with your iPad 10, you can set it aside for occasionally charging the Pencil when needed. And if you misplace it, or leave it at home and find yourself needing to charge the Pencil 1 without it, you can in fact charge a Pencil 1 by plugging it into any iPhone. It of course doesn’t work as a stylus with an iPhone, and doesn’t even trigger an “Accessory Not Supported” alert (which is what you get if you try pairing a Pencil 1 with an iPad Pro or iPad Air using the USB-C adapter), but it does charge. If I owned an iPad 10 and Pencil 1, I’d probably just throw the Pencil’s cap away and keep the adapter attached to the Pencil. It even keeps the Pencil from rolling while attached.

If I didn’t already own a Pencil 1, though, I’d buy a Logitech Crayon instead. Objective advantages of the Crayon:

Objective disadvantage of the Crayon:

Subjective differences between the Crayon and Pencil 1:

Unless you need pressure sensitivity or dislike the feel of a carpenter’s pencil in your hand, Logitech’s new 2nd-gen Crayon is a clear winner compared to Apple’s Pencil 1. Even Logitech’s old 1st-gen Crayon is a better option — if I have to charge via Lightning, I’d rather my stylus have a simple female port and not require an adapter.

Let’s just get this out of the way: I’m not a kickstand guy. I much prefer the cantilevered hinge of the Magic Keyboard, with its laptop-style footprint and the ability to just pick up the iPad while attached to the keyboard and not have the keyboard half flop around. The two-piece design makes for twice as much work to attach and detach.

But I can see why some people dig a keyboard design like this. Attached to the kickstand back but detached from the keyboard, you have a nice stand for watching movies or just reading. While both pieces are attached, if you fold the keyboard behind the iPad, it somehow detects this and ignores key presses. That’s really clever. You can also attach the keyboard half “backwards” and key presses will always be ignored.

One disappointment is that the keyboard is not backlit. Apple’s Magic Keyboard has backlighting. So too does Logitech’s $160 Combo Touch, which is a fundamentally similar design. The key difference between the Combo Touch and Magic Keyboard Folio is how the kickstand back attaches — with the Combo Touch, it’s a case you snap the iPad into; the Magic Keyboard Folio back attaches magnetically. In addition to my general dislike for kickstands, I dislike that aspect of the Combo Touch — it’s clearly designed with the idea that you’ll keep your iPad in the case even while not attached to the keyboard. When I detach an iPad from a keyboard, I just want to hold it naked. (The iPad, that is.)

The keyboard itself feels great — with keys that feel identical or nearly so to those of the Magic Keyboard, and the same goes for the trackpad. My biggest gripe is that the key layout mimics a baffling design decision from the 11-inch Magic Keyboard and Smart Keyboard Folio: the left bracket key is full-width, but the right bracket key is half-width. 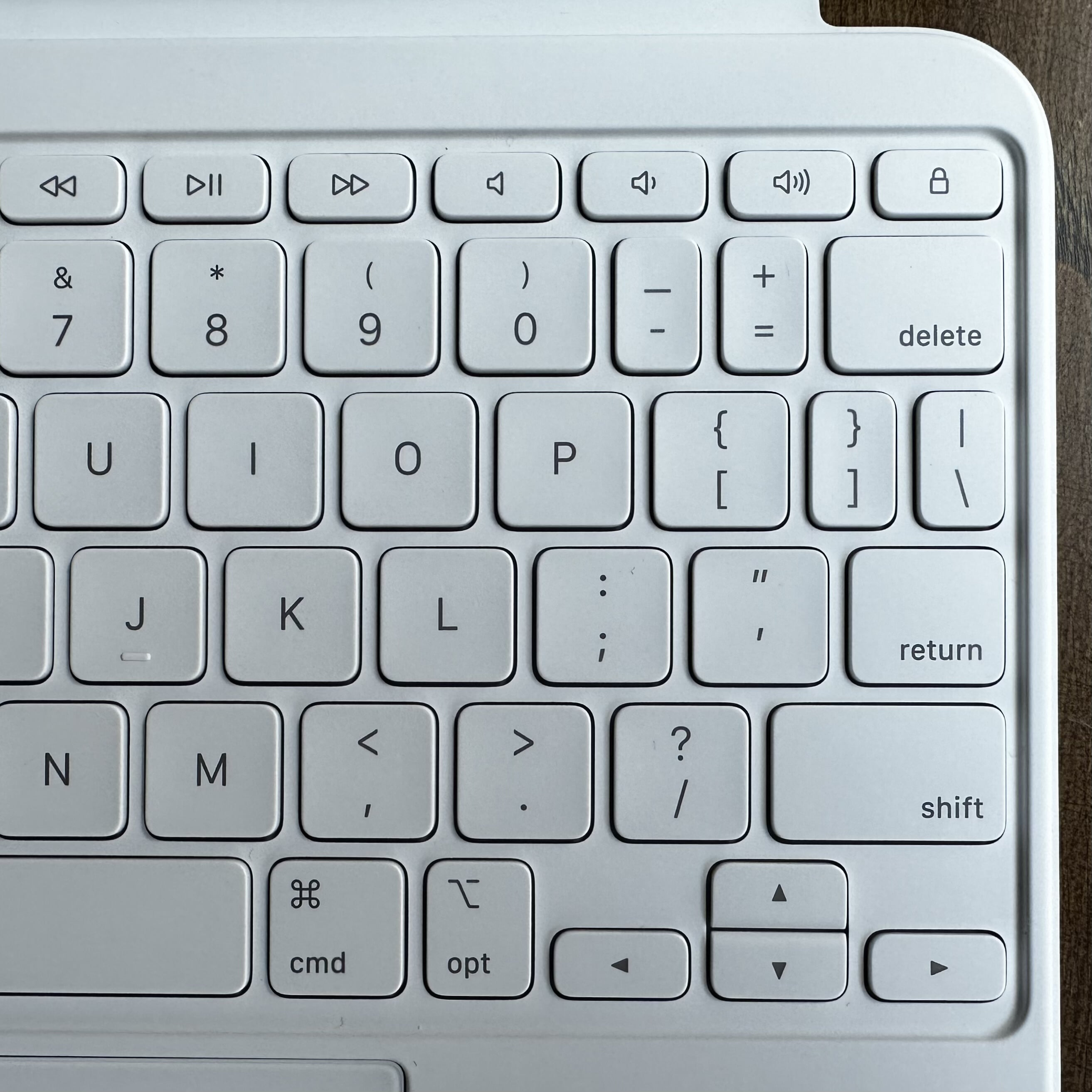 These keyboards are much narrower than MacBook keyboards or the almost-MacBook-width 12.9-inch Magic Keyboard. Widths, by my ruler:

32 mm is about 1.25 inches. That’s quite a bit of width to reduce. All the keys are smaller than on a standard-sized keyboard. Measuring from the left edge of the A key to the right edge of the semicolon key (the home row):

Even with smaller standard keys, though, these keyboards need to make additional concessions, with some punctuation and modifier keys reduced to partial widths. Apple made good decisions on these key cap widths, with the glaring exception of the bracket keys. Clearly these two keys are siblings or peers, and ought to be the same width. That there is not room to make both of them full-width is fine. But rather than make one full-width and the other half, clearly they should both be three-quarters width, like the Tab key or right Option key. Or just make them both half-width. Anything so long as they’re the same size. It makes no more sense for the left and right bracket keys to be different sizes than it would for the left and right arrow keys. Why Apple chose to do this with the 11-inch Magic Keyboard layout back in 2020 is beyond me; why they’re sticking with it is even more baffling.3

All of Apple’s iPad keyboard covers are somewhat expensive. The Smart Keyboard Folio for the iPad Air and 11-inch iPad Pro costs $180; the Magic Keyboard for the same two iPads costs $300. But given that the $250 Magic Keyboard Folio pairs only with the lower-priced iPad 10, it feels particularly expensive. It’s more than half the price of the $450 64 GB iPad 10, and paired with the $600 256 GB iPad 10, the combo costs a not-so-low-priced $850. And for $250 it feels wrong that it doesn’t offer backlighting. I can see omitting backlighting if it were, say, $150. But $250 is undeniably a premium price for a keyboard and trackpad.

As for why the new Magic Keyboard Folio only pairs with the iPad 10, and why the iPad 10 doesn’t pair with either the Magic Keyboard or Smart Keyboard Folio, if you look at the specs, you’ll notice that the iPad 10 is not the same size as the iPad Air. It’s exactly 1 mm larger in all three dimensions: height, width, and most noticeably, depth. 1 mm is not a lot, but it’s enough to spoil any chance at case/cover compatibility, at least for a precision-fit-minded company like Apple.

The new 10th-generation iPad is a solid and welcome addition. It looks good, feels good, comes in a selection of fun colors (Apple sent me yellow), and brings the just-plain-no-adjective iPad to the modern all-screen era. It’s a shame it only supports the new Magic Keyboard Folio and not also the Magic Keyboard and Smart Keyboard Folio, and a bit frustrating that it pairs only with the first-gen Apple Pencil. But it’s an outstanding iPad for anyone looking to spend less than the price of an iPad Air or Pro, and feels designed for the future.